It is rather sad how I spend hours pouring over other peoples blogs and wish to be part of this amazing collection of women. Especially those who like me have children, craft, cook and somehow keep it all in balance. Yet I can’t seem to manage to get this blog thing happening for myself. So for this year, I will try to spend some time regularly on keeping my own online diary up to date.

One thing that will be important for me in this blog, will be to not only address all the great, productive things happening in our life, but also address and share some of the challenges. Especially the challenges of finding time and energy to do everything I am so driven to do. I also want to share some of my challenges with being a professional artist, raising a small family and having this huge need to create. While growing up, so many times friends, family and acquaintances commented on the fact that my dad was never able to sit still, especially my mom always said that he couldn’t stop puttering, he couldn’t sit still. I think I’ve got that from him. 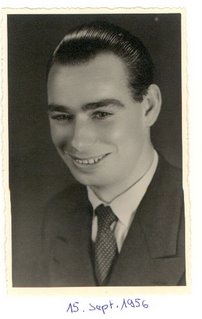 This was dad in 1956, a mere 27 years old. He was born the second oldest of 11 children. He passed on in 1992 and it still saddens me that he was not given enough years to seeing Huxley. I think he would have made a fabulous Grospapi.

Okay, this covers some of the history part that I’ve wanted to get into this blog, now to some of the present. For Christmas I planned to make bags for a number of people that are close to us. Having spent WAY-WAY too much money on Japanese craftbooks last year, I also thought that I need to bring the inspiration into something physical. Richard and I also kinda agreed to only give handmade or reclaimed gifts to the few people that we gift. So I thought what better thing than to make some bags. Who doesn’t need bags. I also wanted to incorporate something from/off Huxley into the bag to make it more relevant to the people getting the bag. I choose his day-care owner (Nana), two of our neighbours (one that used to watch Huxley at said daycare, which is at a neighbours house, the other is our next door neighbour and a fantastic woman of German descent), Huxley’s Grandmother (Richards’ Mom), my close friend with her Swiss Hubby and little Andreas that is a mere 6 weeks older than Huxley, and low and behold I decided to make a bag for myself too. I knew that if I wouldn’t squeeze in the time to make my own now, that it would be months before I got the energy/time to make mine. The scribble fabric is a Gocco print of a drawing Huxley made at the atelier. 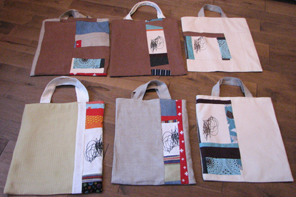 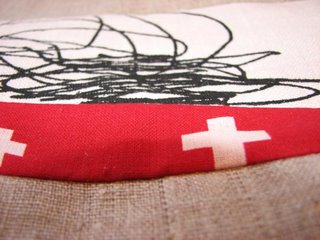 This is a detail of Rima’s bag

Before Christmas I did some rearranging stuff at the art studio (henceforth to be known as atelier, to make the distinction between the place where I go and work, and the home studio where I have fun and make goodies just because and not for sale), I came across a vintage boys pajama that I got almost 30 years ago (does that make me old? grin…) for Rita, my life-size doll that now stands in Huxley’s room, is about his size and seems to freak out a lot of the adults that visit. Huxley likes her and sometimes drags her around. I still remember how cool I thought it was to have a doll that fits the clothes of a real child. My godmother Margrit made clothes for her and I think my mom also knit a couple of sweaters for her. So I found these vintage pajamas that fit Huxley perfectly. He didn’t seem too comfortable in them, as they have a drawstring waist and he is used to elastic waistbands. I’m thinking of replacing the drawstring, but he is almost too big for the top. I wanted to have some nice shoots of him in those jamies though and I put them on him for Christmas eve. Here’s the shot I took: 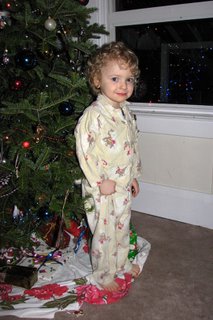 Well, time flies. I just realized that it has been months since I last posted anything. Not that it matters much, as nobody knows that I’m here.

I did pass my 37th b-day without much ruckus. But this whole winter has been rough. I’m so looking forward to spring. I was totally blocked with my paintings this fall and just couldn’t get into the mode of producing them. I also was faced with a horrible experience of Triart changing their Top Coat product and it ruined about 8000 dollars worth of work for me. What a bad thing. I had just ordered a pail of the stuff and used it to coat a body of work for the Show of Hands Gallery. I immediately knew that something was wrong, as the product smelled a lot stronger, re-liquefied the acrylic paint that was dry and even dissolved a marker I had been using to sign my name and never had a problem with before. About 4 days after applying the Top Coat I started to notice cracks in the surface of the coating, going right down to the canvas. In other words, the work was shot. Here I was, needing work, having Galleries interested in showing/selling the pieces and nothing to produce.

It took me about 3 months, but I have now found a product that works for me and it actually also lets me work large and with the abstracts that I’ve been planning. Here is an example of one of the new abstracts: 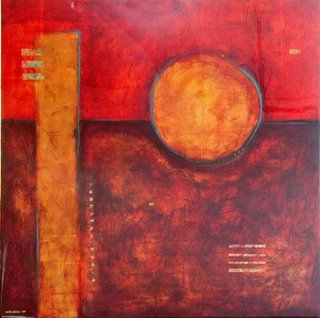 This piece was my showpiece at the Toronto Art Expo and it sold on opening night. I was so happy and it got me really thinking about how much I have achieved since leaving school. The piece came together like a dream. I had applied the new coating 4 times and I just wasn’t sure if it would work I could not make up my mind. Even when Richi came to the studio he (who generally always has an immediate unfailing opinion) could not decide if the look worked. I also make a 3-tick that sold on Sunday (to a amazingly nice couple that had seen it on Saturday but needed to measure their space before committing to the work).

I sent these images to my friends, family and some of “my” galleries and they where all very happy with the work and the galleries as excited to get it.

Tomorrow it’s Easter Sunday and I’ve gotta go to vacuum downstairs so that we can hide the Easter eggs and chocolate bunnies for Huxley. He is such a joy to be with these days, his developing speech is fun and he has a great sense of humor.

I’ve been knitting too, generally in the evenings while watching the tube. Socks for Huxley, socks for me, a cardigan for me and more socks for Huxley. I ordered some denim yarn and will knit Huxley an aran hooded sweater out of it. I’ll shoot for a size 3 -4 , so that there’s not so much pressure to finish it immediately. After reading the Mason-Dixon knittin book I also want to start thinking about knitting a bedspread for our eventually to be finished bed room. We’ve now chosen the colours for the wood floor and the walls. We’ve also choosen the colour range for the living room and will be making a final decision by tomorrow…. Probably a mustardy yellow, a colour, that I have discovered will look equally nice in the heat of summer and the depth of winter. Yeah……
I participated in the Toronto Art Expo in March, which meant that I worked 5-day weeks and 7-day evenings at the studio getting work ready. I did not see much of Huxley and DH, and I missed them. The deadline is wonderful in that it ads the right amount of preassure to get work done, but it’s also contributing to burning me out.

The first week after the show I took a mini-holiday with simply working on home stuff and relaxing. I also helped out a friend who had a newborn and took a couple of extra days with Huxley. I find that is very necessary to ensure that we rebond. I couldn’t work 5 days per week on a regular basis. I need to spend time with my little guy. I find that even after 3 days apart he is pushing my bounderies so much that It’s very hard to get along.

The art Expo was very sucessful. I sold 15 pieces of work, 5 as a collection to a corporate Bay-Street firm. We are now talking on doing a few extra pieces to round-out the collection. The overall show though seemed to have less visitors, I could be wrong on that, but I know for certain that less people seemed to be leaving with artwork. I have signed up again for next year. Even though there are many things in that show that could be improved, it’s currently the only valid option for a public show.

I was also approached by some new galleries, a couple that I’m in serious conversation with. One of the contacts where art representatives; they pay 25% of the retail price of the work and sell it to various galleries across the world. But I just wouldn’t work for that kind of money. It seems to be wrong, that the artist gets the least amount of money. As the work would not excist without the artists. I would have to make twice the amount of work to make the same amount of money that I make now. Their argument is that the artist has volumes of sales. I’d be very interested to hear from artists who find positive notions in this arangement.

This past weekend I went to Gannaoque, ON, in the Thousand Island region, for a 2-day Fibre Arts Retreat. I had a wonderful time doing things that are not focused around painting, but rather on my passion for textiles and fibre. A group of fibre artists from that region www.seventhreadsstudios.com organized the event. It was a first for them and I think they did a wonderful job. My friend Wendo of www.fibreartbywendo.com is a member of the group and since I’m alsways so happy to spend time with her I really wanted to attend. They will run the retreat again next year and alread have 2/3 of the people from this year signed up. I offered to teach a couple of mini-workshops in barter for my attendance next year. I’m very excited about that possibility.

The weekend went by so fast, that I didn’t even take any pictures, but Wendo did… in a shot that sums up my love for fibre. Hugs to you’s who actually find and read this….